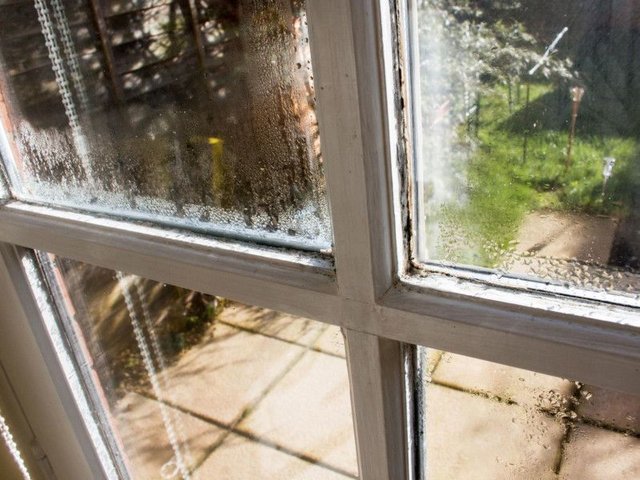 Mould, mildew and related conditions caused by condensation have been the scourge of homeowners for thousands of years. These range from relatively minor irritants all the way to the dreaded black mould. To stop these from making your house inhospitable to you, you need to make the environment inhospitable for them. The best way to do that is to eliminate condensation and damp in your house.

Condensation is essentially the opposite of boiling. If boiling occurs when water becomes too hot to remain a liquid, condensation is when humid air – heavily laden with water droplets – becomes too cold to remain a gas. This happens most often when humid air touches a window, because the latter is most likely to be the coldest part of the outer wall of a house. The water droplets in the air are chilled back into being a thin layer of liquid water on the window surface. From there the dampness spreads elsewhere, providing a perfect environment for the fetid things of this world to fester in your walls, rafters and floorboards.

Condensation can happen in any month of the year but is most likely to happen during the winter months since that is when the outside will be the coldest. Every strategy to reduce condensation must therefore do at least one of two things – increasing the heat of the air in your house or increasing air circulation. The former increases the amount of water the air can bear. The latter spreads the humidity throughout the house, preventing any one area from being particularly humid.

Related:
Here Is All You Need To Know About [email protected]

The gap between a house’s roof and a house’s ceiling is called the roof void. In most houses, this is the loft or the attic. The position of the roof void means that it needs proper ventilation or condensation will form. This is because it is often one of the coldest parts of the house.

The best way to ventilate roofs is to use roof vents. These are versatile apertures in the roof which let in small amounts of fresh air. There are many different types of roof vents that can be installed. Many are roof tile vents, that replace one or two roof tiles, but there are also fascia vents that are drilled into the fascia that supports the roof guttering. There are also abutment vents that can be installed where a pitched roof meets a straight wall.

These roof vents can get rid of the humid air to the outside, protecting your roof void and its contents from condensation and rot.

Careless cooking can certainly contribute to condensation. When boiling water in a pan the steam can be very rapidly cooled down by contact with cold windows. Kitchens are also frequently full of food that could easily become rotted by exposure to dampness. However, there are several measures one could take to prevent condensation from cooking. Using pan lids to keep in steam is one good idea. Another is to use an oven-mounted extractor fan to disperse the humid air.

Keeping the kitchen door closed and the windows open is also a good idea. While kitchens are often at least somewhat protected from condensation by their tiles, the rooms just outside will not be. It’s best then to ventilate the kitchen to the outside instead then and use the closed door to protect the adjacent rooms.

Dry your Clothes in a low-humidity manner

As clothes dry the water has to go somewhere. If clothes are dried on a house rack inside it may cause condensation as the water leaves the clothes. Therefore, if drying the clothes it’s always best to do so on a washing line outside. This is not always possible however, if the weather is not cooperative or if you do not have a washing line.

If circumstances compel you to use a house rack, you can open windows outside while closing the doors to the room it is in. This would allow the air to exit outside while protecting the other rooms of your house.

If you machine wash or dry your clothes you still need to be careful. Washing machines and dryers can still spew water vapour. These machines will still need to be placed in the right situation to avoid condensation.

Hotter air leads to less condensation. Therefore, you should improve your home’s heating on two fronts. One is insulation. Double-glazed windows are an important source of insulation, as are things like a properly constructed roof using modern standards. In addition, properly heating a house during the colder months would become even more important. This is when condensation is at its most likely.

Related:
The Right Way to Prevent Moisture in Your Roof

However, heating will likely be very expensive for the foreseeable future. Skyrocketing prices of fuel especially natural gas are already having an effect. If you are using an alternative source of heating like a boiler or a stove, make sure that there is no fire or carbon monoxide risk.

When other tactics are providing fruitless, you can always get a dehumidifier. This cuts the Gordian knot by directly removing water from humid air. There are two main kinds of dehumidifiers, refrigerator dehumidifiers and desiccant dehumidifiers.

Refrigerator dehumidifiers essentially use the condensation process itself to remove water from humid air. They suck in air and cool it, condensing any water into a reservoir, before reheating the air and sending it back out.

Desiccant dehumidifiers use a drying chemical called a desiccant. You may have seen small packets of these sorts of chemicals labelled “DO NOT EAT” shipped with delicate equipment. These dehumidifiers use this chemical to absorb water from the air. Afterwards, the chemical is dried out within the dehumidifier and the process repeats.

The water collected from dehumidifiers is not suitable for drinking but using it to water plants may be possible.

How to rent a Los Angeles Apartment for Your Internship

Longevity of a Wooden House

Choosing Glass Pool Fencing in Perth, WA For The Safety Of...