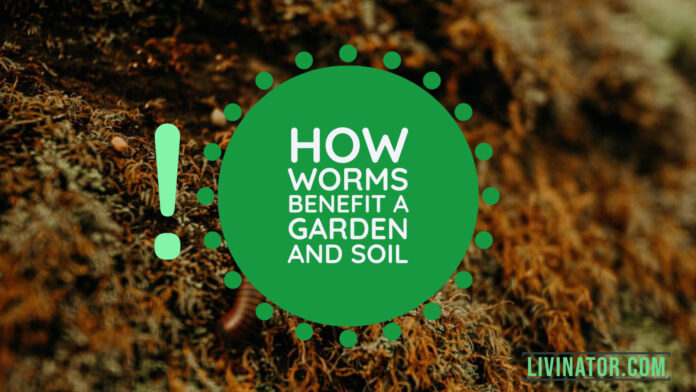 Earthworms help in creating humus – a dark brown-black kind of soil that holds essential nutrients in place for plant use and growth. Additionally, earthworms help in forming good soil structure. Usually, their burrows open up this soil and make aeration and drainage channels.

In general, earthworm excrement or castings are rich in potassium, phosphorus, and nitrogen, which are the fundamental minerals required for plant growth. Additionally, earthworm castings assist bind sulfur, iron, and calcium to soil particles-minerals that also play a significant role in the thriving of a plant.

By adding animal manure, semi-rotted compost, grass clippings, and chopped leaves to your garden will generally encourage earthworms to live in your garden, be active, and even thrive.

What Are the Pros for Having Earthworms in the Garden?

Earthworms make tunnels that enable irrigation water and rain to penetrate the soil. Worms usually burrow through the soil, which allows space for air to get to plant roots.

Hardpan-dense soil is often inhospitable to plant roots, and earthworms break it up. They can also burrow to as deep as 6 ft. in the soil.

After the death of earthworms, their protein-rich bodies end up returning nitrogen fertilizer to the soil.

Earthworms leave behind castings or excrement consisting of 5-11 times the amount of potassium, phosphorus, and nitrogen they have ingested.

Earthworms consume semi-rotted compost, animal manure, rotting plants, and bits of soil. As a result, organic matter is naturally ground in their gizzards, combined with enzymes and digestive juices in the stomach and eventually returned to the soil.

How Do You Encourage Earthworms in Your Particular Garden?

If your garden has only a few earthworms, it might mean that the soil is low in organic material or is compacted. Adding animal manure, semi-decomposed compost, grass clippings, and chopped leaves to your garden will enable worms to thrive.

In case your garden has no or few earthworms, the ideal way of transferring worms into your garden is by digging up large turves (section of matted grass), or chunks of soil rich is worm burrows and worms. After setting them whole in your garden, new earthworm colonies could get started. You can read more about this at https://www.redbudsoilcompany.com/collections/worms

What Are the Various Types of Earthworms?

In general, Night Crawlers (Lumbricus terrestris) and Field Worms (Allolobohora caliginosa) are the types of earthworms that are popularly found in farmland and home gardens. These worms often thrive in cool soil and may be found on the soil surface at night or during rainstorms if their burrows are flooded. Although earthworms don’t have eyes, they are sensitive when it comes to light. Usually, when light is shone to them, they’ll retreat into the soil.

Although Night Crawlers and Field Worms are not applied in worm compost bins, they can be spotted in freestanding compost piles in your garden. They’ll often congregate at the bottom of any compost pile since the pile doesn’t become very hot, and they can quickly retreat into the soil beneath the pile.

Raising these redworms in boxes and giving them kitchen waste to produce castings to be utilized as plant fertilizer is called vermiculture.

8 Things To Know About Septic Systems

Detailed Guide on How to Arrange Pictures on Wall

What Gutter Experts Would Like You To Know: 4 Secret Tips

Monograms Add the Personal Touch in Your Home