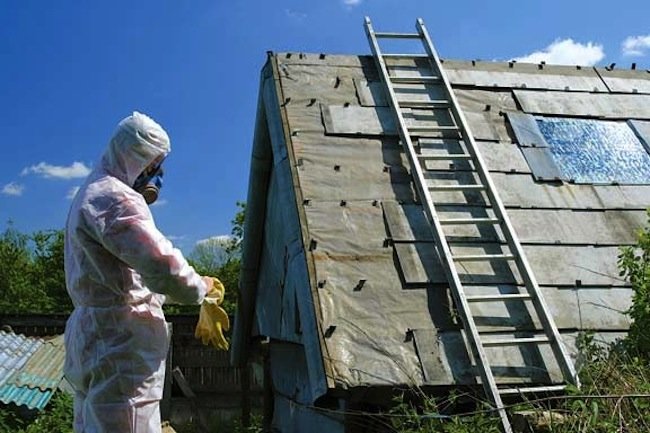 Asbestos is a natural silicate mineral that has been mined extensively throughout the world, and until the 1970s, asbestos was used in construction, mainly because of its fire-resistant properties. Asbestos fibres were pressed into sheets and the material splinters when cut or broken, sending minute slivers of fibreglass into the air, and these airborne fibres can easily be inhaled. People who worked with asbestos in manufacturing plants mysteriously began to suffer with respiratory issues, and two and two were put together, and we began to realise the dangers of this substance.

This lung disease is the scarring of lung tissue, due to long periods of being exposed to asbestos, and many workers contracted this disease prior to the discovery of the dangers, with many law suits filed. If asbestos is not disturbed, it does not pose a risk, it is only when the material is handled, cut or moved that the fibres become airborne, so if you think you have some asbestos in your home or workplace, don’t touch it and call an asbestos removal company, who will safely remove it for you.

If you do find asbestos in your home or office, there’s no need to panic; it has been there for a good few years, and if left undisturbed, it presents no danger, yet obviously, you have to have it removed, and should you be in the middle of a major renovation and come across what you think is asbestos, you can get a few asbestos removal quotes in Perth by searching online for specialist companies. Whatever you do, do not try to remove the asbestos, and contamination has no external signs; you could inhale the fibres and nothing will show up for a decade, such is the nature of this harmful material.

Even though the use of asbestos has been banned in Australia for many years, it is still being discovered, so much so that a whole asbestos removal industry has evolved, and if you even suspect there might be asbestos in your property, call in the experts. They have the equipment and the know-how to safely remove the material, and if you are uncertain of its presence, they can test for the presence of asbestos.

There are several types of asbestos, the use of blue asbestos was banned in Australia as early as 1967, while brown asbestos was extensively used in the construction industry right up to the mid-1980s and was finally banned from building in 1989. The material was still used in brake linings until 2004, and today, asbestos cannot be imported into Australia. Homes that were built between the end of WWII and the 1980s do contain asbestos, so it is still a national problem and will be for many years.

When we look back, there were decades of extensive use of this harmful substance, and despite banning asbestos, there are still many buildings in the country that contain asbestos, which will eventually have to be removed.

10 reasons why owning a pool is a fantastic investment!

Ways to Make Your Bed The Coziest Place on Earth

Home Safety Checks to Perform after Buying a New Home

How to build a successful property portfolio