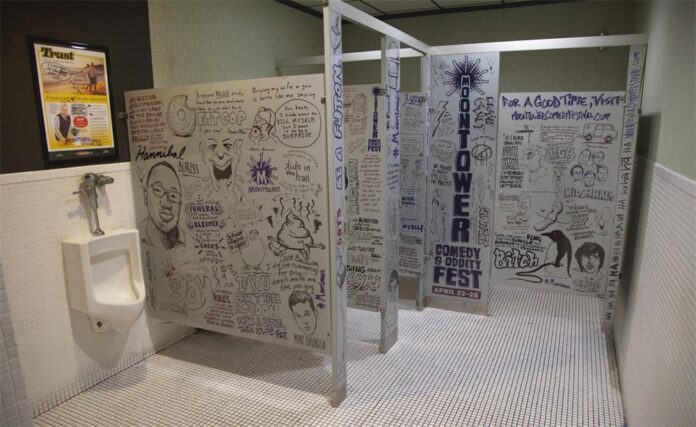 I’ve never seen a public restroom that didn’t have some sort of graffiti to distract me as I did my business. As I read a Confucius quote written next to a drawing of a deceased pigeon on a worn out partition panel, I begin to wonder about the psychology of all these graffiti and how public restroom owners can protect their property.

I was in elementary school when I first saw my first piece of bathroom stall graffiti. It was van unremarkable drawing of a puppy. Next to it, someone drew a bone. “Cute”, I thought. “Someone thought of feeding it.”

After some time, I decided that I wanted to contribute to the growing number of drawings and writings of our school bathroom. I had just finished taking (and failing) a Math test that I didn’t study for. I ran towards the female restroom and hid in one of the stalls, fuming with anger. I took out a Sharpie, intending to spill my emotions onto the partition panel. I remember feeling an adrenaline rush as the tip of my Sharpie started gliding on the surface. “I Hate Math!”, I wrote next to a quick caricature of my Math teacher.

As I grew older and started using public restrooms in adult-infested areas, I noticed that the graffiti on the walls was done on a whole new level. Well, most of it. Of course, there were still immature drawings of private parts here and there. But there were also beautiful quotes and pieces of poetry. There was gossip, stories and exclamations of joy, sadness, and heartbreak. More than declarations of hatred towards Math, there were declarations of love written in the most beautiful ways possible.

A lot of people, especially owners of the establishments and facilities, look at graffiti as a nuisance. After all, if it’s done without the owner’s permission, it’s considered vandalism – illegal damage to public property.

Why do people participate in restroom graffiti anyway? What’s the psychology behind it?

The Defacing of a Bathroom Stall

Apparently, another word for toilet graffiti is latrinalia – a fancy name for something that can be anything but fancy. And it’s not a new thing. It’s been around since the dawn of the first public restroom back in the 1st century AD.

There are a bunch of studies on the topic, too. These studies have compared the different latrinalia found in men’s restrooms and women’s restrooms.

While women wrote about love, romance, and heartbreak, men drew private parts and only ever used the word “love” when declaring their love for private parts.

More than just a space for self-expression, toilet stalls became message boards. Latrinalia made by women were found to be motivational and inspiring. Tons of messages of encouragement were found for bathroom users to read.

“You got this, sis!” was a popular line in many women’s restrooms.

Men also participated in these motivational graffiti session, albeit not as cheesy.

“Don’t be an asshole” was my favorite line.

In my opinion, the best latrinalia are the funny ones. I can’t count the number of times I’ve gone to use the toilet and heard the person from the neighboring bathroom stall laugh out loud at the jokes written on the panels.

The latrinalia studies didn’t find any significant differences between funny graffiti in men’s restrooms and women’s restrooms. They were all equally funny.

These studies have shown how much more profound women can be in terms of latrinalia. However, one does have to consider other factors like the time men and women actually spend inside a public restroom.

Men don’t always need to use the toilet. They can spend less than a minute at a urinal, wash their hands (or not), and leave the restroom just like that.

Whether it’s to do a number 1 or a number 2, women always need to use the toilet stalls. This exposes them to their canvas more and gives them the privacy they need to write or draw on it. Aside from that, women tend to congregate and stay in restrooms for longer periods of time. Oftentimes long enough to express in sentences, paragraphs, or elaborate drawings – anything that takes longer to draw than cartoon privates.

How Owners Can Protect Their Public Restrooms

Although I, personally, enjoy reading and admiring latrinalia art, I know that these facility owners don’t share the same joy.

Owners can protect their public bathrooms from vandalism by scheduling regular maintenance, investing in anti-graffiti paints, and investing in better materials for their toilet partitions.

Owners can keep graffiti from spreading all throughout their restrooms by scheduling regular maintenance. They can hire cleaning crews to monitor the cleanliness of their bathroom walls and stalls on the daily.

There are tons of graffiti removal products that can safely and effectively wash out unwanted graffiti written, drawn, or even sprayed on their property. Removing graffiti as soon as it’s done also discourages offenders from doing it again – there’s no use in expressing yourself with latrinalia when it’s constantly erased.

Anti-graffiti coating painted on restroom walls and toilet partitions can also be a deterrent. If their latrinalia won’t stick, why even bother?

A better investment would be to just get toilet partition materials that already have anti-graffiti properties so you don’t have to spend more for additional coatings or even for graffiti removal products.

Solid plastic or HDPE toilet partitions are popular materials with anti-graffiti properties. Another choice would be phenolic, though it’s much pricier.

These strong materials are also good against other forms of restroom vandalism, like carving and scratching.

As entertaining as latrinalia can be, they are still considered forms of vandalism. Thousands of dollars are spent on preventing and removing latrinalia. But considering the psychology behind it, I think the best way to prevent latrinalia is to divert it – give people a different avenue for public self-expression. After all, that’s all latrinalia is.

Bedroom Tips Based on the Way You Sleep

5 Home Improvement Projects You Should Not DIY

The Best Pool Trends We Expect to See in the Future